Our school has a long history...

Records show that a school building made of vertical slab walls and a bark roof and lined with bark was built for Dr. Henry Backhaus at Kangaroo Flat in 1860.

Pupils attended under the care of a Miss. Wall 1859-1860. This bark school is believed to have been situated within the boundary of the present school grounds. The original Church built at St. Monica's in 1864 was used as a Church School. This building was constructed from bricks fired in the open from clay obtained from the present school oval area. The moulding and firing of these bricks was a unique process..

The unfired bricks were placed in low stacks or in shallow trenches and a fire was maintained around each stack or trench to produce an even temperature until such times as the bricks were considered ready. This moulding and firing was carried out near the creek bed, behind the present school.

This building (Church-School) was officially blessed by Bishop Gould from Melbourne on July 24th, 1864. It served as a Church until the present St. Monica's was built in 1926.
In 1920 the Sisters of Mercy took over St. Monica's , with Sr. M Clare and Sr. M. Magdalen were the pioneers and 58 pupils were enrolled.

In the late 1920's and 1930's dances and euchre nights were held to raise funds for the School and Church.
Also in the 1930's an Irish Gentleman canvassed the Golden Square area every Sunday, asking Parishioners for two shillings or whatever they could afford to help support the school. This man did not have children at the school. Many people worked tirelessly to help St. Monica's School and Church.

A school committee ran card parties, fetes and raffles to raise money. The ladies on the committee provided breakfast for the school children after Mass on the first Friday of each month. Also about this time (1946) Monsignor Arthur Owens was living at Genazzano and worked in this area before it became a parish. The school committee also provided a scholarship each year for a pupil to go to St. Mary's College or Marist Brothers College.

In 1952 , after this Parish was formed, all organizations were disbanded, except the school committee, and the Altar Society. St. Mary's Parish Committee was formed to attend to works and programmes at the school and Church.

In 1959 the three classrooms facing High Street were built. These were blessed and opened by Bishop Stewart. The enrolment was 220 and there were 4 teachers.

In 1966 two portable classrooms were added. 1978 saw the construction of 4 more open-style classrooms and a shared resource area. Two more portables were added in 1989 and these were blessed and opened by Bishop Noel Daly.

Fast forward to 2014 where we celebrated the redevelopement of our school which included completely new buildings and modern upgrades to exsisting areas of the school. The Catholic Disocese of Sandhurst Bishop Leslie Tomlinson led a short tour of the site to bless the new buildings now named Jarra Centre, Mercy Wing, McAuley and Backhaus Buildings. 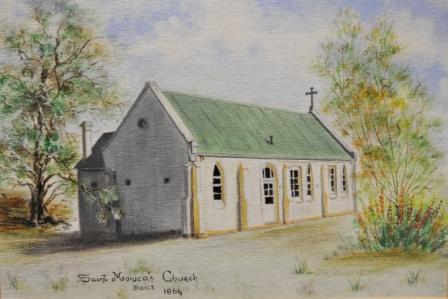