All children have a right to feel safe and to be safe.  As teachers, we have a legal and moral responsibility to respond to serious incidences involving abuse and neglect of the children with whom we have contact, and to report instances that involve physical, emotional, psychological, sexual abuse or neglect.

To ensure that childrens’ rights to be safe, are maintained and each child is protected against physical, emotional, psychological, sexual abuse, and neglect.

All Staff (teaching and non-teaching) are to complete the online ‘Protecting the Safety of Children and Young People, Mandatory Reporting Professional Learning Module’.

Certificates of completed ‘Protecting the Safety of Children and Young People, Mandatory Reporting Professional Learning Modules’ will be kept on file in staff folders.

New staff will be informed of mandatory reporting responsibilities and procedures as part of their induction procedure.

Under the Children, Youth and Families Act, teachers are legally compelled to make a report to Child Protection if they form a belief on reasonable grounds that a child is need of protection from abuse.

Forming a belief
To form a belief, the reporter must be aware of matters and hold any opinions in relation to those matters that lead them to reasonably believe a child is in need of protection

Saint Monica’s requires staff to report their belief, when the belief is formed in the course of practising their profession. A report must be made as soon as practicable after forming the belief, and on each occasion on which they become aware of any further reasonable grounds for the belief.

There may be times when two or more mandated professionals, ie. a teacher and a principal have formed a belief about the same child on the same occasion. In this situation it is sufficient that only one of the mandated professionals make a report. The other is obliged to ensure that the report has been made and that all the grounds for their own belief were included in the report made by the other person.

The reporter will contact the Department of Human Services by telephone as soon as possible to make an official notification on:

All reports, information sheets and subsequent discussions and information are to be recorded and shall remain strictly confidential in a locked file.

If a report is made in good faith then:

Confidentiality is provided for reporters in the CYFA and prevents the disclosure of the name or any information likely to lead to the identification of a person who has made a report in accordance with the legislation except in very specific circumstances.

The identity of a reporter must remain confidential, unless:

A mandated professional who fails to report a 'belief based on reasonable grounds that a child is in need of protection' because of physical or sexual abuse is liable to be prosecuted under s. 184(1), CYFA.

Members of the Department of Human Services, or associated support or intervention services that visit the school following a notification, will interview staff and children only in the presence of a Principal, class member or his/her nominee.

Staff are required to report reoccurring incidents as they arise.

For follow up confidential staff support, staff members can notify Catholic Care Sandhurst on 1800 222 125. This is a complimentary service for Sandhurst employees for adequate supervision purposes.

This policy will be reviewed as part of the school’s three-year review. 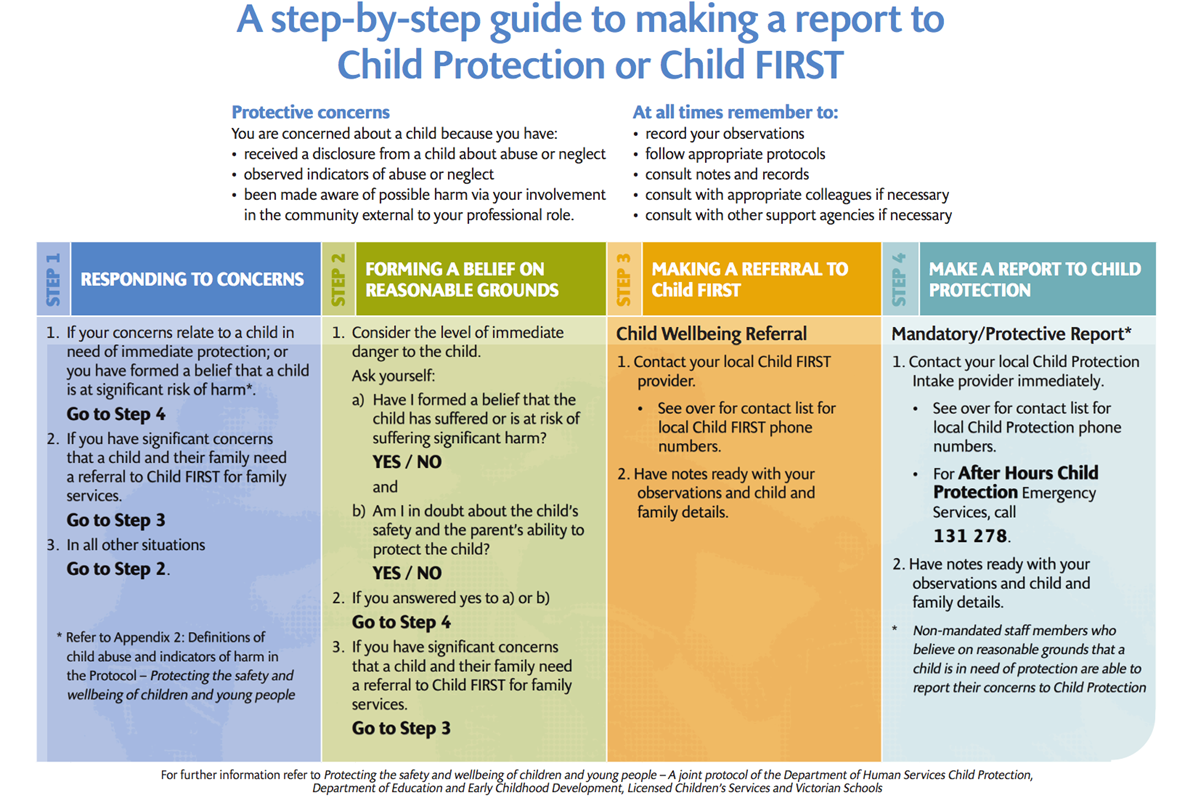